Namibia is located in southwest Africa, bordered by Angola to the North, Botswana to the East and the Atlantic Ocean to the West. This land is so large and sparsely populated that it is possible to encounter areas without towns, trees or any kind of life for hours of travelling. Namibia is the soul of Africa, of beautiful safaris and distinguishes itself by its natural beauty, stark contrasts, epic settings, and diverse wildlife.

Namibia is a natural and dramatic wonderland. The country’s name derives from its desert, the Namib, a surreal landscape comprising ossified tree trunks in Sossusvlei, sand sea, and perfectly shaped, endless sand dunes that float down to the sea at the Skeleton Coast where shipwrecks, whalebone shelters used by the San and ghost towns lay along the shore – as a human, you almost feel completely insignificant in the face of nature. These reddish dunes are over 230 meters high, amongst the highest in the world, and is one of the driest areas worldwide. When moving inland, you will discover a spine of mountains, the Naukluft Mountains, the Brandberg, Spitzkoppe, Damaraland and the jaw-dropping Fish River Canyon which run across the country and create a fantastic scenery. Simply put, it is an explorer’s dream-travel destination. There really aren’t many African countries that can match Namibia’s natural beauty.

This land is one of Southern Africa’s best places to watch wildlife and to go on safaris in the North. Etosha National Park belongs in the elite wildlife-watching destinations, being home to giraffes, big cats, elephants, a large part of the cheetah population, and black rhinos. The Damaraland region is host to Africa’s largest population of free-ranging rhinos and desert-adapted elephants and lions. Over in the Caprivi Strip, the wildlife is returning, with Bwabwata and Nkasa Rupara, becoming wonderfully rich parks to explore.

Namibia’s human story is fascinating. There are many ethnic groups, some of the country’s smaller groups of people such as the San and the Himba still keep their age-old nomadic lifestyles, hunting with bows and poison arrows. Everywhere you go, you will get a chance to encounter and interact with soulful people full of wisdom and happy to share with you their memories of growing up and living in Namibia. 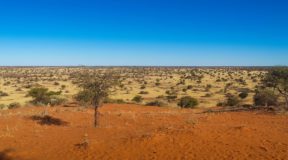 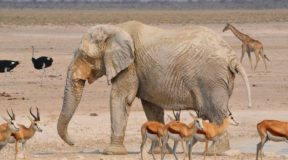 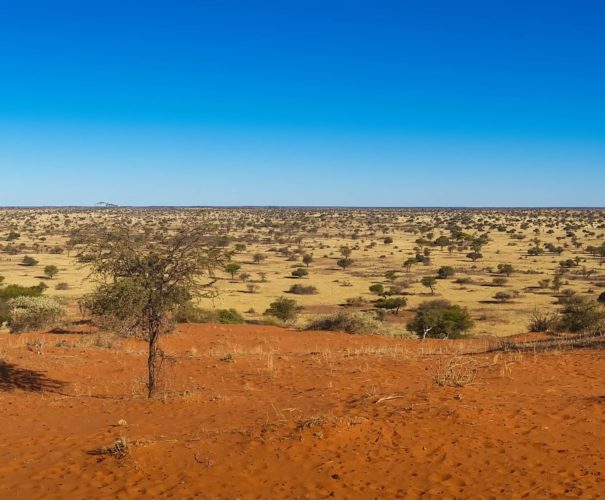 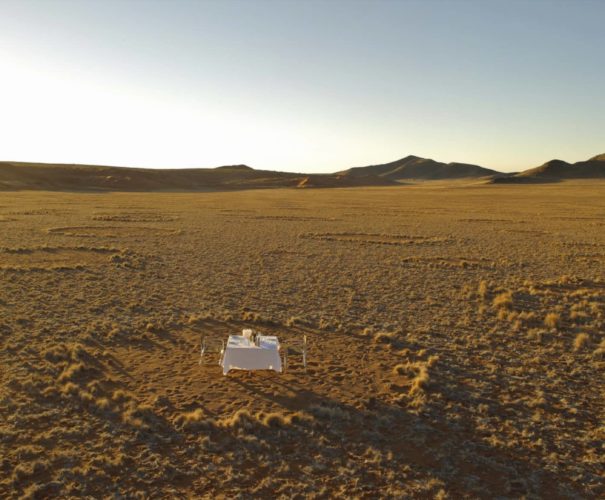 Arrival at Windhoek International airport, meet and greet and transfer to your hotel. The rest of the day is at leisure.

jour 02
LOST IN THE CANYONLANDS

After breakfast, head down into the Namib Desert, passing through the scenic Khomas Hochland. In the late afternoon, visit the Sesriem Canyon.

jour 03
LOST IN THE CANYONLANDS

During your two days, enjoy magical excursions into the Namib Naukluft National Park.

Continue northwest through the Namib Naukluft National Park. You will reach the coast at the port town of Walvis Bay before continuing north to Swakopmund.

Spend time wandering around town and along the waterfront and partake in the many other activities the city has to offer.

After breakfast, you will leave Swakopmund and head into the Damaraland of north-western Namibia, making your way towards Twyfelfontein.

Spend two days exploring this remarkable region and to search for game, as well as visit Twyfelfontein and other nearby attractions.

Today, you will be heading northeast towards Etosha National Park via the farming centres of Khorixas and Outjo. Later, you will go on a game drive.

The first day is spent game-viewing in the Etosha National Park.

The next day, enjoy exciting game viewing withing the eastern section of the park.

jour 11
VISITING THE PLACE OF THE BABOONS

After breakfast, make your way to the Okonjima Reserve at the base of the Omboroko Mountains and head on a guided afternoon excursion. After dinner, go on a night drive.

After breakfast, head back to Windhoek International Airport via the town of Okahandja for your flight back home. 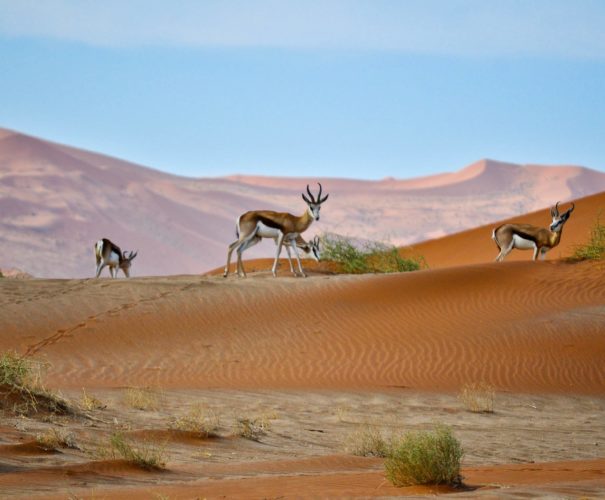 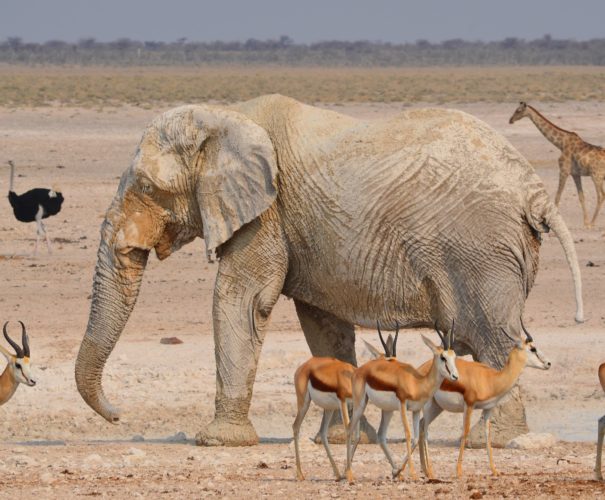 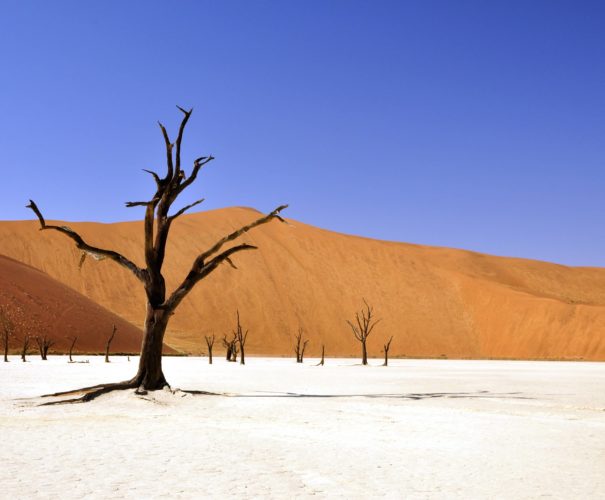 Arrival at Windhoek Airport, meet and greet and transfer to your lodge. Afternoon at leisure.

Today, transfer to the Kulala Wilderness Reserve in Sossusvlei, and head to your camp. You will spend two nights in Sossusvlei.

The day is at leisure to enjoy the many camp activities.

Today, you will transfer to Swakopmund and head to your hotel. You will spend two nights in Swakopmund.

After breakfast, head out to expore Swakopmund, Walvis Bay and your surroundings at leisure.

This morning, transfer to Twyfelfontein in Damaraland and head to your camp. You will spend two nights in Damaraland.

The day is at leisure to enjoy the activities on offer at your camp.

Today, you will transfer to your next lodge, located near Etosha National Park. You will spend two nights in Etosha.

The day is at leisure to enjoy the camp activities in Etosha.

jour 10
BACK IN WINDHOEK

This morning, transfer back to Windhoek and head to your hotel. The rest of the day is at leisure.

Morning at leisure. Later, transfer to Windhoek International Airport for your flight back home. 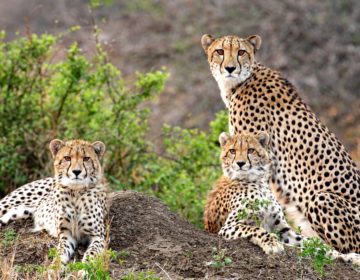 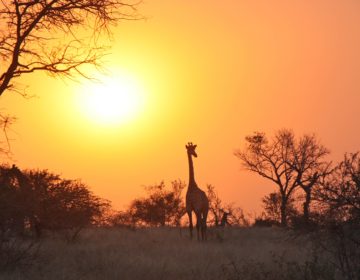